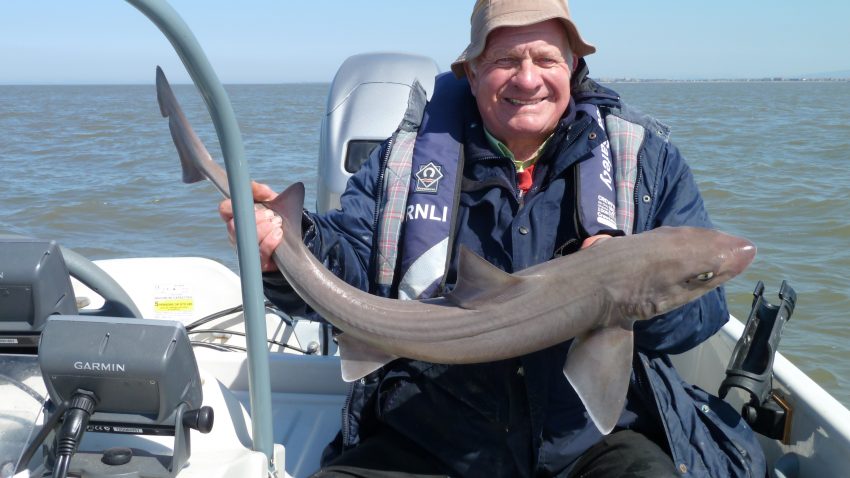 Three Days in May

15, 16 and 28 May 2014. Following on the heels of April’s very reasonable weather May has again provided several opportunities to launch and Alan Taylor accompanied by Pete Holland on the first two days then yesterday by son Andy Taylor have made the most of it.

Day one and two saw Alan and Pete fishing the flood tide anchored in around 25 feet of water off Norbreck, marks along the Gynn wall and finally opposite the Tower. Oddly, large numbers of undersized codling remain on all marks and Pete was again in his element mix and matching these with whiting and dabs.

Alan continued in his quest to beat Andy’s PB common smooth-hound of 2013 and might have done so on 16th had his trace not failed at the swivel loop to a large but unseen smut. Literally seconds later it was Pete’s turn as Alan passed him his second crab baited rod and the first `double’ Starry Smooth-Hound of 2014 came aboard.

Yesterday saw Andy back on board and the pair headed directly to Norbreck an hour and a half into the ebb. Anchoring in around 30 feet of dropping water reading 56 degrees they set out their stall for tope and smooth-hound and waited but after more than an hour, absolutely nothing.

At around half ebb the first of two crab baited rods arched over in its holder as a smooth-hound of around the 7lb mark set Andy’s circle hook. Then more waiting, interrupted only briefly by Alan baiting with razor just to prove that there were indeed codling and dabs under the boat before the first of the two tope baits was picked up. Fish on for Andy, most certainly a tope but after a few moments of head shaking it was off. No matter within 10 minutes Alan’s bait set off and their first tope of 2014 came aboard. At around the 5lb mark only a tiddler but definitely a start then all went quiet and so the pair moved off into 40 feet.

Their two tope baits attracted only dogs but as the tide dropped interest increased in their crab baits and the pair boated a further 15 smooth-hound before calling it a day half an hour before low water. 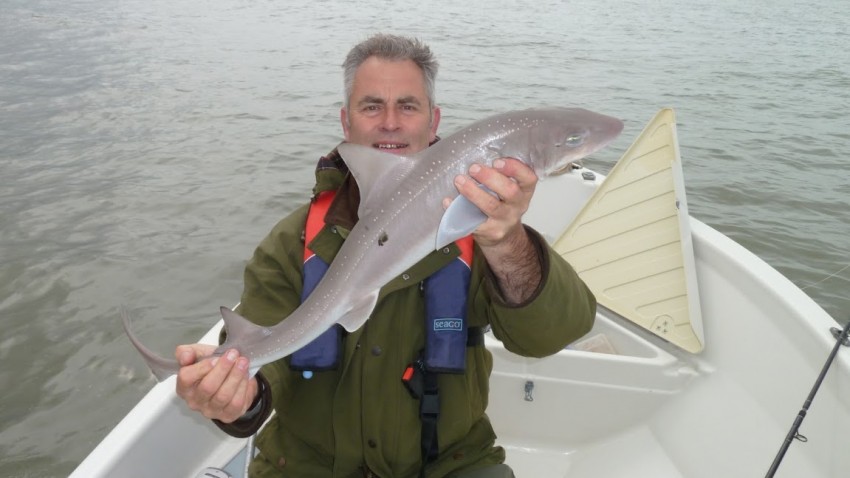 29 April 2014. With the flood tide well underway, Alan Taylor and Pete Holland dropped `Lil Hookers’ anchor in 35 feet of water three quarters of a mile off the Miners Home.

In a strong tide run, Pete was fishing a single rod with a double boom arrangement and did not have long to wait before small codling homed in on his snotty black baited hooks. Alan, fishing two rods, a single 5/0 circle baited with crab for smuts on one and a squid wrapped fresh black in the hope of a Thornback on the other, looked on as Pete got into his stride. With likely more than 20 undersized codling and Dogfish to Pete’s credit, Alan’s crab bait finally received interest and the first Starry Smooth-Hound of the day came aboard.

With no sign of let up in small fish but with increasingly more Dogfish making their presence felt, the pair up-anchored and moved North to re anchor inshore off Norbreck in 26 feet of water to fish the last hour of the flood. Pete added fresh black, frozen razor and a third hook into the mix, Alan switched his second rod to crab and sat it out. In the Run up to high water Codling, Dogfish, Whiting and Dabs came to Pete’s baits, many as double headers but though the fish were plentiful the fish were again small.

Alan’s smut count rose steadily as the fish moved through and though as expected it quietened off over high- water when they called it a day 2 hours into the ebb he had boated 17 Smooth-Hound, both Starry and Commons varieties to around the 7lb mark.

On a side note, the water temperature had risen 2 degrees since last week to 52 degrees and though none of Pete’s fish were mauled, the Tope surely cannot be far behind. 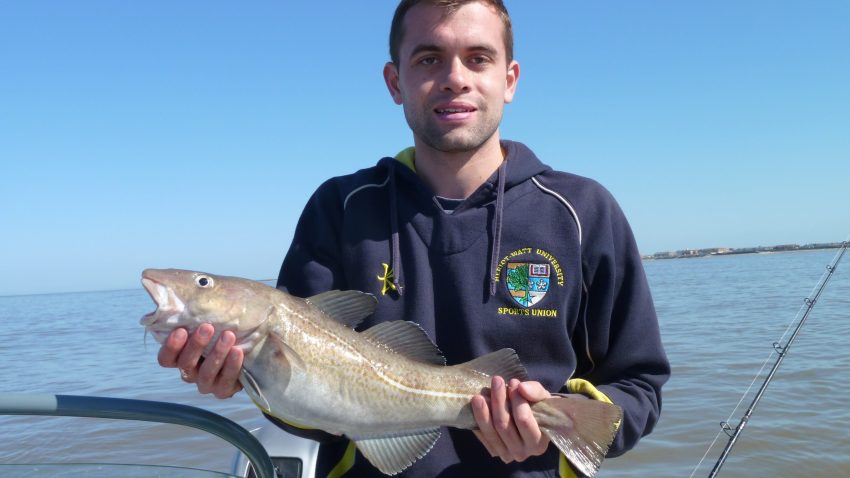 Off To A Flyer

18 April 2014. With an excellent forecast for the day, Alan Taylor and sons Andy and James floated `Lil’ Hooker’ off as the tide reached low water. Their plan was simple, head north, sit in shallow water off Cleveleys and try for plaice, but not before attaching a pot to the anchor chain in the hope of tempting a decent crab.

First stop in just 12 feet of water and it was two light class rods baited with fresh black, a third with frozen crab. As the morning chill started to warm, the light breeze fell away and it was James, an occasional angler, who was first to see any action as a small, but beautifully conditioned Codling swung aboard. OK beginners luck, but then followed a Whiting and Dab before Andy or Alan saw a bite. And so the next couple of hours saw steady stream of fish coming to the boat, including Thornback Ray, Common Smooth Hound and the ever present LSD’s.

As the tide rose, it was time to find some run so a move was called and Andy dropped anchor several hundred yards further out in 27 feet of water reading a still cool 50 degrees. Several more undersized codling came aboard but the LSD’s appeared to be present in numbers so the trio upped anchor and moved to the Norbreck area.

As the day got warmer still, out came the sunscreen, over went the pot loaded with frozen mackerel scraps and business got a little more serious. Still more Codling, Dabs, Whiting and LSD’s found their baits, punctuated by several more Thornback Ray to around the 6lb mark, both Starry and Common Smooth Hounds hovering around 3-4lb and also Bull-Huss to around 7lb.

No Plaice put in an appearance and though the pot yielded three crabs none were sizable but the day ended well. The highlight of the morning was to be Andy’s, as bending into an energetic smut? he sent Alan scrabbling for the landing net when it suddenly turned into a 5lb 7oz Cod. As Andy reminded his brother, ”it’s not how many fish you catch James, or their size, it’s what ends up in the fish box!” Oh how he’s changed his tune since last season.